In 1983, Horowitz performed recitals of the same program at many venues, including Philadelphia, Chicago, Boston, the Metropolitan Opera House, and the Pasadena. These recitals gained a poor reputation, but Horowitz made his first visit to Japan in order to perform the same repertoire in Tokyo. In the Tokyo recital, the pianist failed dismally. After this event, he withdrew from the stage and the recording studio for almost one and a half years, trying to restore his health with his new doctor. After recharging himself, he signed a contract with Deutsche Grammophon. He was not yet in complete health, so he started to record his playing at home in November 1984. In April 1985, his performance was videotaped at home as well. After he had fully recovered, he started to do recording sessions at a studio in New York. Then he performed recitals at the Théâtre des Champs-Elysées in Paris and Teatro alla Scala in Milan in October, and at Carnegie Hall in December.

Horowitz got well enough to return to the stage, so he concertized in Moscow in April 1986, then in Leningrad (aka Saint Petersburg), Hamburg and Berlin. In Tokyo, he gave three recitals.

In March 1987, the pianist visited Milan again and played Mozart's Piano Concerto No. 23 with the Filarmonica della Scala conducted by Carlo Maria Giulini, which was recorded on video. After that, he began an extensive tour of Europe, including Amsterdam, Vienna and Hamburg.

Under his contract with Deutsche Grammophon, many recordings and footage of his performances were released. However, I have only listed the photos of his CDs below. The CDs and LPs of those performances were sold between 1985 and 1990. Please see Chapter 7 for the footage of Horowitz. The CDs mentioned below are important and fundamental. The pieces on the CDs are included in Appendix III.10. 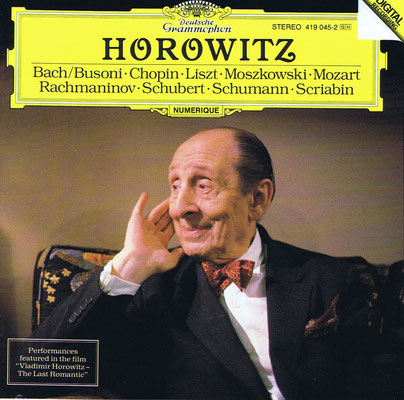 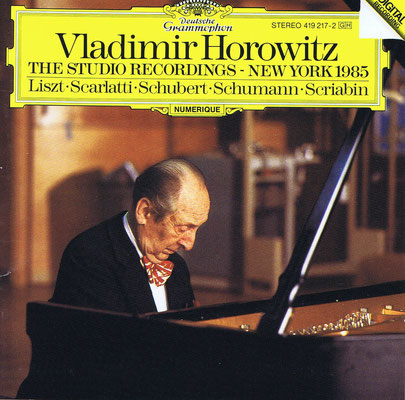 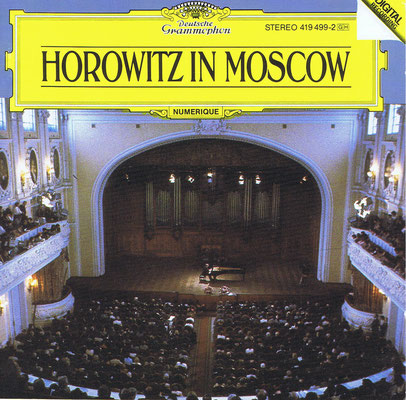 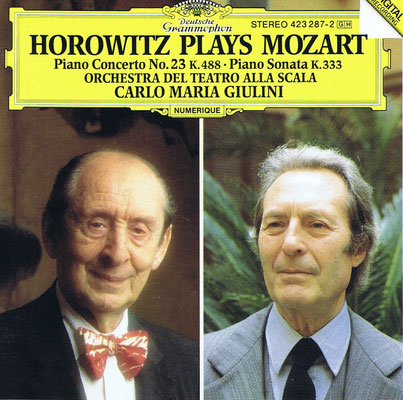 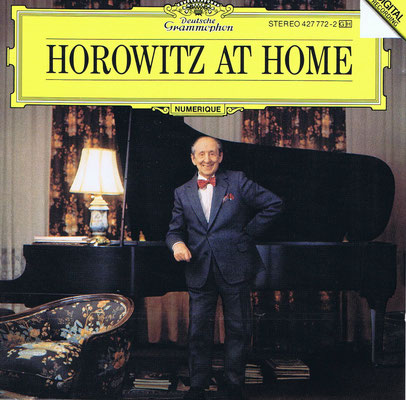 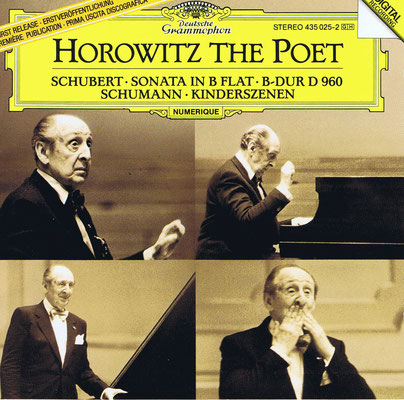 In 1991, Deutsche Grammophon released a 25-CD box set that collected together all the works of Mozart, including operas and symphonies. One of the discs contains Horowitz’s performances of Mozart’s Piano Sonatas K.281, K.330 and K.333. 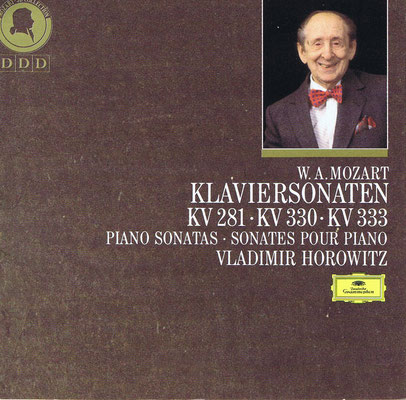 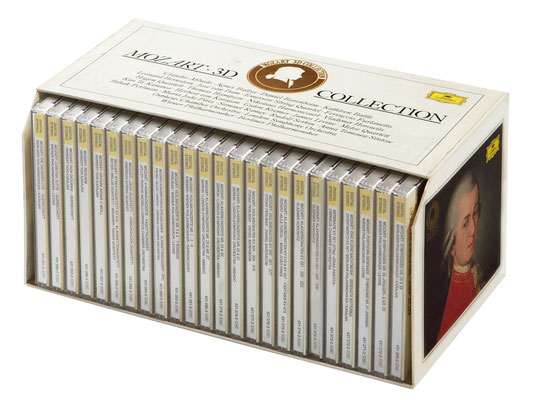 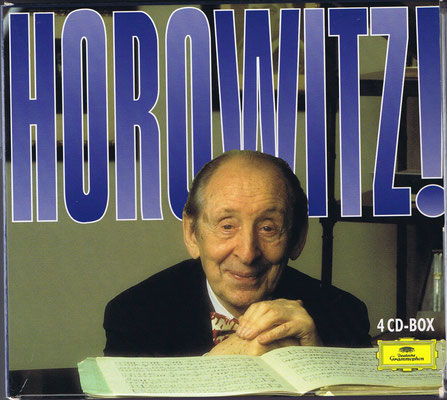 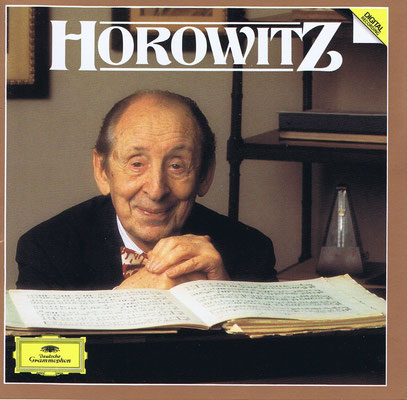 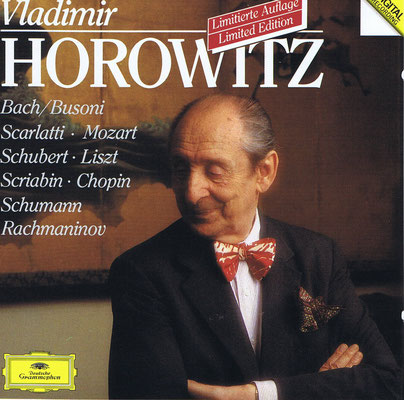 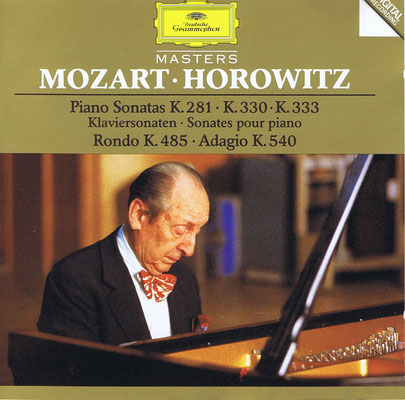 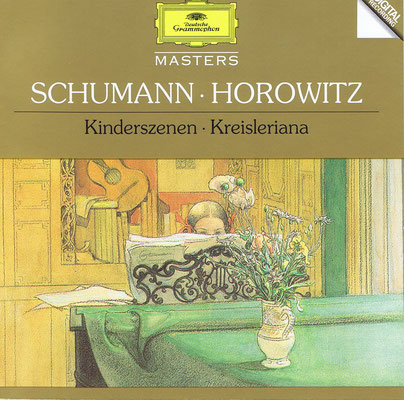 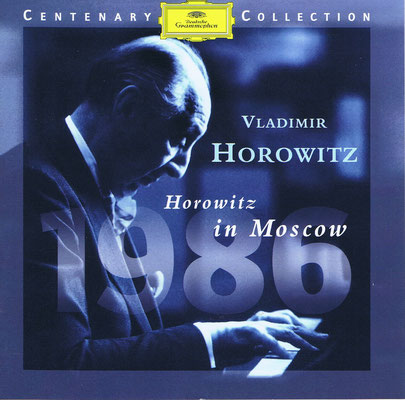 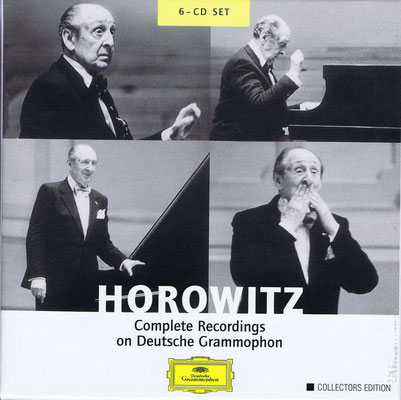 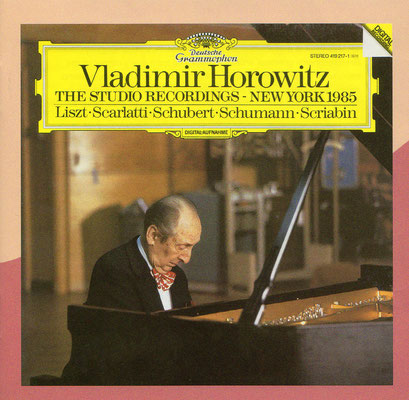 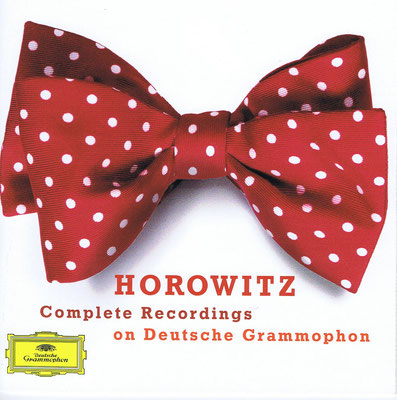 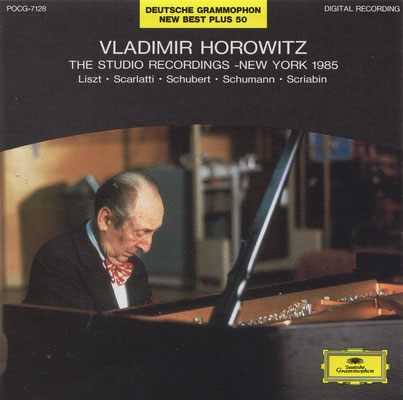 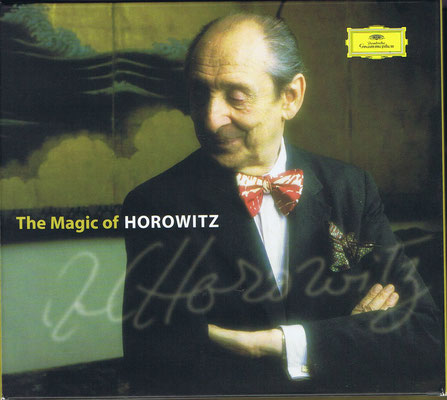 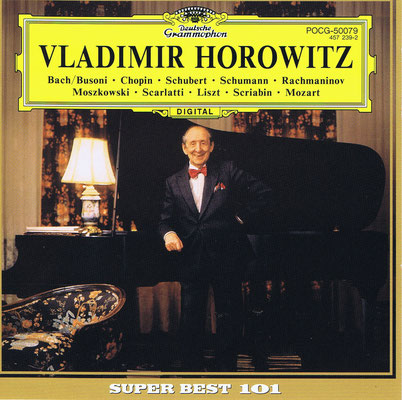 Although his recitals in Paris, Milan, Leningrad and Tokyo between 1985 and 1986 were not included in the CDs made by the company, they can be heard on some CDs produced by non-major labels. The label also videotaped his concert in Vienna.

In 2003, the “Magic of Horowitz” (2-CD box set) in the photo list was released to honor the 100th anniversary of his birth, and combined material from the archives. The CD box set contains two pieces that were first releases (Mozart’s Rondo K. 511 and Horowitz's arrangement of Liszt's “Ehemals!”), along with a bonus DVD. The DVD recording, which had already been on sale separately, includes Mozart's Piano Concerto No. 23 videotaped in Milan.

In 2005, Canada’s HIPO Records released a 200-CD box set called “20th Century Masters” as a celebration of the music of the 20th century such as country and western, jazz, easy listening, and others. Seventeen out of the 200 CDs are from the field of classical music, including a disc of a Horowitz performance released under license from Deutsche Grammophon. 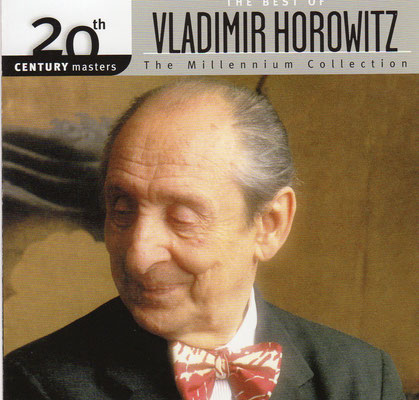 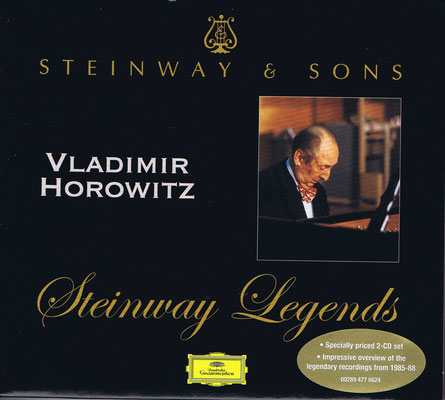 In 2008, Deutsche Grammophon released a CD of Horowitz’s Hamburg recital which was the last time he appeared on the stage. 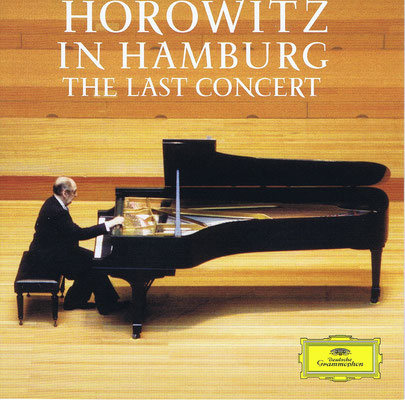 In 2009, Deutsche Grammophon published a book titled “State of the Art” to mark the 111th birthday of the label. The company started off making audio recordings in 1898. The book is one of a number of celebration projects,. It contains many beautiful photographs as well as articles about various musicians of the past 111 years, and is accompanied by six CDs. One of these CDs includes Horowitz’s performances. In addition to the book, three CD box sets called “111” were also released. I have the actual CD box sets, but here I have reproduced the flyer for them. 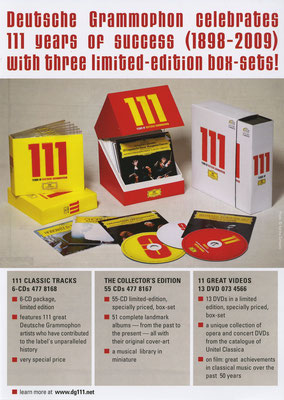 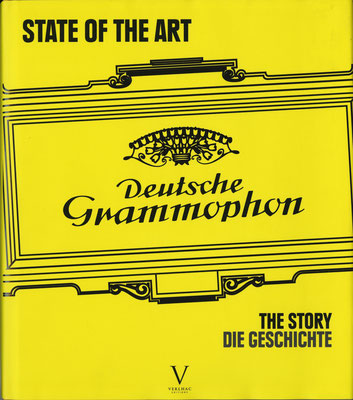 A book Grammophon and Ad

In 2010, Deutsche Grammophon released a CD box set with an image of a bow tie on the jacket, that contained all of the Horowitz recordings that the label had released in the past (including his Hamburg recital). The CD box set also contains two pieces that had first been released in the “Magic of Horowitz.” Two pieces weren’t contained in the first release of his Deutsche Grammophon LP and CD.

At the beginning of 2014, the company released a 3-CD box set enclosed in a paper case. The edition contains a combination of previously released performances and a photo of Horowitz. The photo is reproduced below. 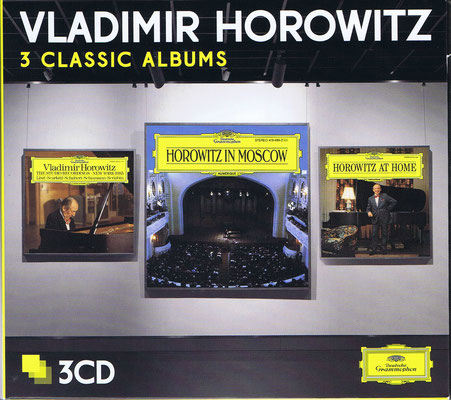 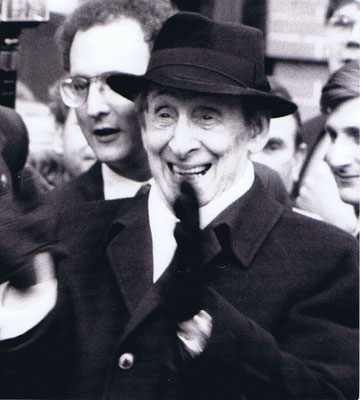 In the fall of 2015, Deutsche Grammophon released a 2-CD box set containing a recital that Horowitz gave in Chicago on October 26, 1986. This album includes the complete program, together with encore pieces. According to the explanation by Jon Samuels in the liner notes, Horowitz made his debut in Chicago in 1928, and had a total of 37 opportunities to play the piano in the city: 27 recitals and 10 concerto performances. The 2-CD box set contains the audio recording of his last Chicago recital. When Horowitz was younger, there was an occasion where he gave four concerts in a row with the same program in response to a fervent request from his fans in Chicago. However, he was too old to do this in 1986, so the concert organizer decided to broadcast his performance on the radio, allowing more Chicago citizens to experience the music. This fact had been forgotten for a long time, but Samuels found out about it and began to do some research. In October 2013, he finally discovered the recording tape of the last recital.

The 2-CD box set contains two versions of the interview with Horowitz. One is an interview that was taped on the day before the last recital and aired on the radio during a break in the recital. The other is a 32-minute interview that Thomas Willis, senior music critic of the Chicago Tribune, conducted on October 30, 1974. 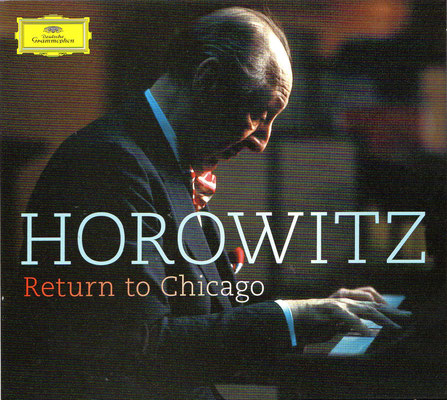 Since 2015, Deutsche Grammophon has released some CDs using recordings that have previously been released and totally new jacket designs. I have included a photo of one of them below. 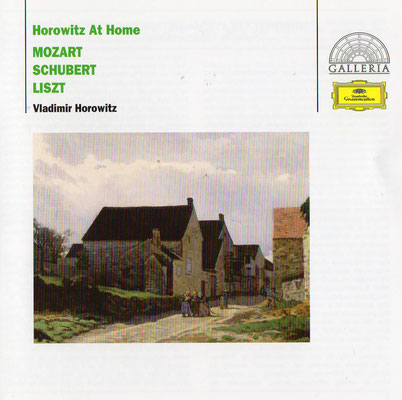