This chapter begins by summarizing the age of the LP, and is followed by chapters that provide the details of each record company.

Columbia Records in the U.S. introduced the LP in 1948. The records come in three different sizes, 7, 12, and 10 inches in diameter, and are designed to be played at 33 1⁄3 revolutions per minute (rpm). The 7-inch LP is the same size as the 45-rpm record but has a smaller central hole. The LP is lighter and more durable than the 45 and 78.

The color of most LPs is black, but a few 12-inch LPs are red, as shown in the picture. The 7- and 10-inch LPs, as well as the red LPs were produced in the early 1950s. The LP record is usually protected by an inner sleeve made out of either plastic or paper; the paper jacket has a circle cut-out in the center that allows the record label to be seen. The LP record in this inner sleeve is placed in a square outer jacket or sometimes in a box. In the case of Horowitz’s LPs, those newly recorded after his historical comeback in 1965 were quite sumptuous, and most of them came with an explanation booklet. Records sold in Japan tend to be more attractive than those sold in other countries; however, even in Japan, repeatedly re-released records come only with a single sheet of liner notes instead of a booklet, and ultimately, only with a jacket with some explanation printed on the back, like those sold in the U.S. As for LPs in the U.S., first pressings are generally covered by better-made jackets than later pressings with identical record numbers.

In 1957, the first stereo record using the “45/45” single-groove system was released. This system divides a single groove into two sides at a 45-degree angle and enables the groove to hold different music on each side. However, the LPs produced at that time needed to support both monaural and stereo systems because the monaural record player was still widely used in the first half of the 1960s. The letters preceding a record number are used to distinguish between monaural and stereo recordings.

The quality of sound depends on the country. Because Japan was lagging behind in terms of classical music appreciation until the 1970s, playing records was almost the only way for classical music fans to enjoy top-class music at a time of their choosing. Top-class musicians did come to Japan; however, the fans seldom, if ever, had the opportunity to attend live performances. Probably, this was the reason for the improvement in the sound quality of recordings in Japan. And it would have led Pioneer and Sony to develop the laser disc and compact disc, respectively.

Horowitz stopped giving live performances in February 1953 after the concert he held to celebrate the 25th anniversary of his debut in the U.S. He also stopped recording in the studio after June 10, 1959, the date he made his last recording for RCA. Later, in 1962, he signed with Columbia Records and resumed recording in the studio. Four LPs were made in Columbia Records’ studio, all of which were rated very highly, but he did not make any public appearances during this period. Horowitz made many recordings for Columbia, including his amazing return concert on May 9, 1965 (double album) and three concerts in 1966 (double album containing the best parts of the three concerts), as well as his television special Horowitz on TV. In 1975, Horowitz returned to RCA, and in 1984, he signed with Deutsche Grammophon. His final recording, before his death, was for Sony Classical. The following is a list of the contracts Horowitz had during his career. The list is not based on contract periods, but on the dates when recordings took place under the contracts, which were provided by Johansson’s The Horowitz Website.

(The 85th Carnegie Hall anniversary concert on May 18, 1976, was recorded by Columbia.)

Horowitz left many recordings for the above-named companies.

LPs of Horowitz’s performances started to appear in the 1950s. In addition to new recordings, performances that were previously recorded on 78s by HMV and RCA were released on LP. All the LPs released by Angel / Seraphim / EMI / Pathé / Toshiba were of recordings originally made by HMV on 78s.

HMV’s LPs released in the U.K. and France with the famous dog logo, the corporate logo of HMV, are especially valuable. In the U.K., the LPs even have the mark to show that the company was a purveyor of goods to the Royal Household; of course, French LPs do not have that mark. 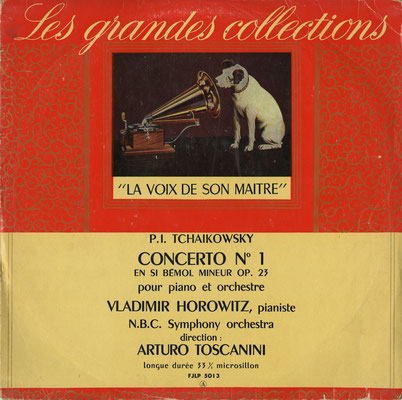 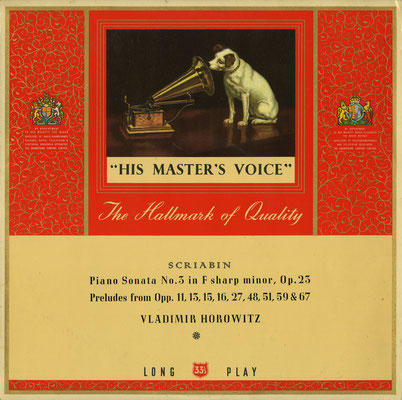 2Photos LP made in the UK and France

Horowitz was contracted to RCA twice in his career—he terminated the first contract in 1959 and entered into a new contract in 1975—so LPs released by RCA can be classified into two groups: the first and second RCA periods. During the first period, re-releases as well as tens of new recordings were released. The first edition of a new recording was first sold in the U.S. and the U.K., then in Germany, Japan, and in other countries. After his dramatic return in 1965, recordings made by RCA were released as sets in Japan and Germany. They were collections of LPs with the same jackets and were called complete sets. In Germany, 20 LPs numbered from VH001 to VH020 made a set. VH series covered with uniform jackets were also released in Italy, France, and the U.K., a little after the release in Germany. In Japan, complete sets were released four times. The first was a complete collection of 18 LPs in five boxes. The second was the VRA series which was an 18-LP set. The third was the SRA series, which came as a 22-LP set, including two bonus LPs, in two boxes (the SRA series LPs were not sold separately). The last was the RVC series which was a 21-LP set. In the U.S., the ARM1 series covered with jackets of the same design was released in the 1970s and later; however, the ARM1 series was not sold as a complete set. In the U.S., there were many instances in the 1950s where the design of the LP was changed after its first edition were sold out. This practice created LPs with the same record number and different jackets. The U.S. prefers to resell a popular product, while Germany and Japan—especially Japan—prefer to make a completely new album.

In 1962, Horowitz commenced his contract with Columbia and released several LPs. Columbia used the same jacket, which was originally designed for the first edition in the U.S., for most of those LPs that were released globally. Columbia released 16 LPs globally with an almost uniform design, with some exception.

When rereleasing LPs, Columbia (which later became CBS) used the same number and almost the same jackets in the U.S., whereas in Japan they numbered the LPs anew and covered them with the same jacket. The 16 LPs were repeatedly re-released around the world, and in Japan CBS SONY re-released them three times as a complete set in a box, of course, taking into account the Japanese preference for complete sets. Several times, these box sets came with free gifts including an autographed picture of Horowitz printed on thick paper, some of which were accompanied by stand so that the purchaser could place the picture on their desk. 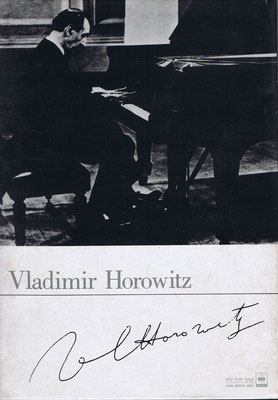 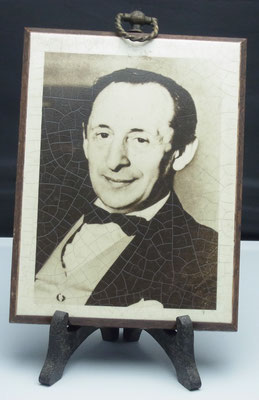 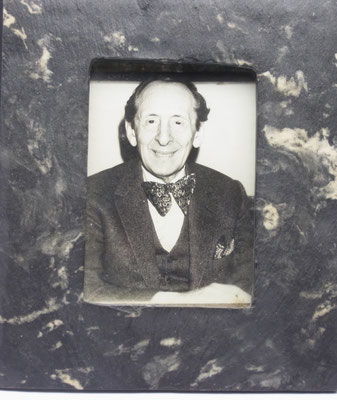 After 1975, the recordings made for RCA (the second RCA period) were released on nine LPs. And Deutsche Grammophon released six LPs after 1984, including Horowitz the Poet released in Germany as the last of the six LPs. Deutsche Grammophon did not release it on LP but on CD in Japan. They, too, used the original designs on the jackets and jackets when selling their licensed products in many parts of the world.

His final recording, for Sony Classical, was completed four days before his death in October 1989, and was released not only on CD, but also on cassette, DAT, and LP in the U.S.

As stated above, all of Horowitz's recordings for all the record companies he worked with have been released on LP, except for those which did not meet the sales criteria in 1990 (the year after his death).

A few recordings released on 78s and 45s were not re-released on LPs, but there are CDs of all the recordings now. However, as mentioned above, a piece of music recorded on a 78 that Horowitz got withdrawn from sale immediately after its release has never been released on any CD.

Many of Horowitz’s outstanding performances are left to us in the form of sound—on piano roll, 78, 45, LP, CD, open reel tape, cassette tape, and DAT—as well as in images—on silent film, VHS videotape, laser disc, VHD (the optical disc which was marketed predominantly in Japan by Victor Company of Japan), DVD, and YouTube.

Besides formal recordings through contracts with record companies, his legacy includes various other types of recordings: secret recordings by the audience at concerts, a private collection recorded in response to a request from Horowitz himself (the Yale Collection), and recordings made officially by record companies but unreleased. Moreover, the spread of the personal and downsized recorder increased the number of secret recordings after 1960 and contributed to this legacy. Even the engineers working for concert halls made recordings as Horowitz began to develop a reputation. Radio listeners would record the coverage of his live performances, which were broadcast frequently in the U.S., using private recorders. Radio stations have also kept these recordings.